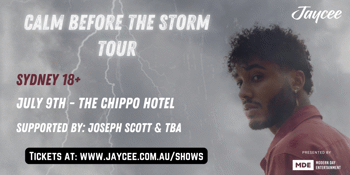 Jaycee - 'Calm Before The Storm’ Tour

with Joseph Scott + DJ Redwolf + Special Guests
The Chippo Hotel (Chippendale, NSW)
Saturday, 9 July 2022 8:00 pm
46 days away
18 Plus
Music
Hip Hop
POP
Australian Artists
Send this event to
After a long hiatus being locked in the cocoon of Western Australia, Jaycee makes his exciting return to the stage for his 2022 ‘Calm Before The Storm’ tour.

With four shows across Melbourne, Sydney and Brisbane, this intimate run on the east coast will give long waiting fans the chance to hear music Jaycee has consistently released during lockdown, as well as new songs from his upcoming mixtape ‘Calm Before The Storm’.

Jaycee is best known for his versatile sound and invigorating live performances, and with his message of independence and hard work, each show promises to be an uplifting and inspiring experience for all that attend.

Jaycee is a Jamaican-Australian singer, rapper, producer, multi-instrumentalist and entrepreneur. Born and raised in Perth, WA, he began his solo career at the beginning of 2018 busking in the streets. Since then, he has gone from strength to strength, releasing four self-produced projects: ‘Modern Day’, ‘Because It’s Summer’, ‘OneSongOneDream’ & ‘Life Goes On’ and numerous singles, amassing a large independent catalogue of 70+ original songs.

With over 5 million streams across Spotify & Apple Music, and over 1 million followers on TikTok, Jaycee is very quickly making a name for himself, and without doubt a very unique artist to keep an eye out for.