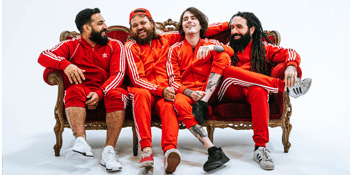 with Down For Tomorrow
Waywards (The Bank Hotel) (Newtown, NSW)
Saturday, 20 March 2021 9:30 pm
18 days away
18 Plus
Music
Australian Artists
Send this event to

Following on from the release of their critically praised second EP ‘But No Thanks’, Sydney-based punks FANGZ have just revealed tour dates and their ghastly new single ‘Self Medicate’ - produced by Stevie Knight (Yours Truly, Stand Atlantic, The Dead Love), and mixed by James Paul Wisner (Hands Like Houses, Underoath).

On ‘Self Medicate’, piercing guitar paves the way with a descending chromatic progression, as thudding bass and monstrous drums meld to create a cacophony of chaos. As the track unfolds with its searing intensity, the mesmerising vocals of Josh Cottreau soar relentlessly, as the enigmatic frontman delves into a more serious subject matter with powerfully evocative lyrics.

Bassist and co-lyricist Jameel Majam describes the motivation behind ‘Self Medicate’:

“‘TLDR; ‘Self Medicate’ is about learning to deal with your anxiety and using self care rather than substance abuse.

In particular, this song was written after one night in Brisbane. I had Jägermeister for breakfast and vodka for dinner. At the time I was dealing with a lot of changes in life and felt like I was continuously putting on an act. It all came to a head onstage that night…

I forgot how to play our set, couldn’t tune my guitar and drunkenly lashed out at my band mates. I quit the band that night only to wake up on Sunday and sheepishly apologise to everyone in a Hungry Jacks in Grafton. On Monday, I went to the doctor and got a referral to see a psychologist.”

To celebrate the release of the new track, FANGZ have announced a five-date tour across NSW, ACT and QLD, including a performance at Inverted Festival, alongside Skegss, Trophy Eyes, WAAX and Stand Atlantic.

Coming along with them for the ride are fellow Sydneysiders Down For Tomorrow; a band who thrived throughout 2020, picking up strong support from Spotify, Apple Music, triple j and Rock Sound (UK), amongst many other globally renown tastemakers.

In the live arena, FANGZ have sold out multiple headline shows and supported the likes of Comeback Kid (CAN), Cancer Bats (CAN), Gyroscope, Totally Unicorn and Bare Bones.

In the coming weeks, FANGZ will unveil an accompanying music video for ‘Self Medicate’.

‘Self Medicate’ will be available worldwide on Friday February 26

- Shows will be seated (1.5m apart) and limited to 68 per sitting to allow for social distancing.

- Due to venue seating layout, tickets are only able to be purchased in groups of 2 or 4 (subject to availability for both)