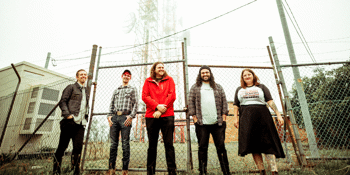 with Snape + Raised As Wolves
The Chippo Hotel (Chippendale, NSW)
Saturday, 12 June 2021 8:00 pm
27 days away
18 Plus
Music
Australian Artists
Send this event to
Willie Nelson famously warned mammas around the world to not let their babies grow up to be cowboys. With all due respect to the great man, however, Amends have never been the kind to follow rules – and that song came out well before any of them were born, anyway.

Starting life in the mid 2010s as an emo-rock revival outfit, front-man Luke McDonald later recalibrated and expanded the project to incorporate a sound more focused on alt-country, heartland rock and folk-punk. As a result, Amends' 2019 debut So Far From Home served as the band's most realised effort to date. It also served as a cementing of Amends' creative engine room – McDonald, guitarist Beau Turner and the husband-and-wife team of Ellen (bass, violin, backing vocals) and Marcus (drums, percussion) Tamp.

After playing shows extensively in support of the album, including a support slot with The Menzingers and their own mini-festival “Best In The West”, the Western Sydney band turned their attention to the next chapter. The work towards album number two saw some key changes at play. First and most obvious was bolstering their line-up with the addition of Kurtis Veness, providing a mix of lead, rhythm and slide guitar in the fold. The freshly-minted quintet formation of the band allows for more instrumental switch-ups, as well as a fuller and more forceful Amends sound.

The second change, however, is a switch-up in the band's overall song writing approach. Rather than take the direct, autobiographical nature of So Far From Home, the band's new album takes a non-linear path across a series of stories and characters – both real and imagined. True to its nature, the band have opted for the title Tales of Love, Loss and Outlaws to reflect the album's compendium nature.

“The new record is a collection of short stories, which take themes and ideas from personal experiences and fictional worlds,” explains Luke McDonald. “It explores the realities of the short time we have living on earth, and our need to hold onto the things that mean the most to us – family, time, memories, the desire to cease existing.”

Bunkering down at Def Wolf Studios in Sydney's Sutherland Shire over the winter, the band co-produced Tales themselves with long time friend Thomas Sigal. Having created So Far From Home in a near-identical fashion, the band hoped to develop their working relationship further by exploring the potential raised by their new line-up and outlook. “We wanted to write an honest record,” says McDonald. “True to the music we love and listen to, while also pushing ourselves into a more developed sound and style.”

Amends didn't come back to town alone, either. Joining proceedings on the record are Murder By Death cellist Sarah Baillet and Against Me! leader Laura Jane Grace. The former contributes strings on the ballad “I Gave My Heart Away A Long Time Ago,” while the latter duets with McDonald on “Walking Backwards.” Needless to say, the pair's contributions to the record were met with great excitement by the band themselves.

“We met both Laura and Sarah on their 2018 tour of Australia, and struck up quite the friendship,” recalls McDonald. “We had list of people we might want to do guesties on this record, and we honestly thought they were a long shot – but hey, here we are.”

“Murder By Death and all of Laura’s projects (especially Against Me!) have been really big influences on this album, as well as our band’s writing in general. To have them be willing to be a part of it is truly so special, and a real band highlight for us all.”

A few years short of a decade, Amends are nigh-on unrecognisable from their origins. Then again, that’s exactly the point – they now stand as sharper, stronger and far more ambitious than the band they used to be. Tales of Love, Loss, and Outlaws demonstrates as such, leading by example and solidifying their status as one of Australian music’s most unique and endearing prospects.