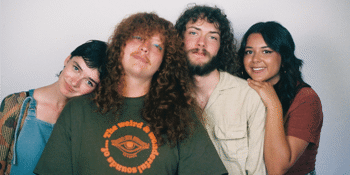 Whilst Sunfruits music is playful and upbeat, the meaning and messages behind the music concern environmental collapse, social uprising and the willingness to change outdated views. Sunfruits have been nominated for two Music Victoria Awards including Best Band and Best Song as well as being dubbed "one of 2020's most exciting acts" by Pilerats. They have collaborated with iconic soy milk brand Bonsoy, environmental organization Green Music Australia and sold out shows across the east coast of so called Australia. Their most recent 7” features remixes from Traffik Island, Hachiku and Candy. The band have sold over 1500+ records to date through their collaborations with Third Eye Stimuli Records, Six Tonnes De Chair (EU) and more recently Flightless Records (Distro). With recent supports including Gabriella Cohen, Beans, Hachiku and appearances at NYE On The Hill, Brunswick Music Festival, Euroa Music Festival and more, Sunfruits are poised to take off with the finishing touches being put on their debut album which is due out 2022.


Join Sunfruits at their first show in Sydney/Gadigal in over a year!
January 13th
8pm

Support from:
Bliss
The Sugarland Express