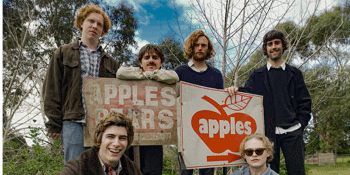 with Noodle House
The Chippo Hotel (Chippendale, NSW)
Friday, 30 April 2021 6:30 PM
9 days away
18 Plus
Music
Australian Artists
Send this event to
Coming hot off the release of their sophomore album 'Bees' (January 2020), Bones and Jones have moved away from what they describe as their "humble beginnings" as a 60’s rock inspired group. While maintaining their knack for writing catchy pop tunes, the band have steered themselves towards a more mature sound; a brilliant integration of pop and rock that is uniquely their own. Bones and Jones have a sense of multi-genre fluidity which allows their reach to span across diverse audiences of old and new music lovers.
Announcing their third album in July 2020, the band promised a series of single every month until the release of 'Ginger Gold (Farm Singles)’.
Recorded over a period of three months during the first COVID lockdown, the tracks were laid down in the band’s “usual rehearsal space” on an old apple orchid farm. The recording and rehearsal studio was converted from the farm’s decommissioned fruit cooling room.
Over several years, the dynamic six-piece have emerged as one of Melbourne’s most exciting and energetic performers. The silky blend of swaying drums, roaring lap steel and driven organ paint the picture of the immense live sound they are so well known for.
Since their inception, Bones and Jones have toured extensively, sharing stages with the likes of Twin Peaks, The Nude Party and The Murlocs, as well as gracing festival stages at New Year’s Evie and Grampians Music Festival.
'Ginger Gold (Farm Singles)' will be available in all its glory, digitally and on limited edition vinyl, in full from February 24 2021.
“Thousands of bands try and replicate the loose charm of 60s and 70s classic rock and blues, but so few make it sound this exciting and this much fun.” - Dan Condon - ABC Double J