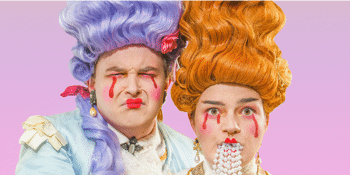 with Special Guests
Waywards (The Bank Hotel) (Newtown, NSW)
Friday, 25 June 2021 8:00 pm
40 days away
18 Plus
Music
Australian Artists
POP
Send this event to
Cry Club will finally get the chance to tour their debut album, God I’m Such a Mess, around Australia. They’ll hit Perth, Melbourne, Sydney, Wollongong and Brisbane on the five date tour this June and July.

The Wollongong-bred, Melbourne based duo are as gentle in spirit as they are ferocious on stage, they have a flair for creating relatable, empowering and danceable anthems coupled with head-turning moments of intrigue and flawlessly tight guitars. It’s this reputation that had them selling out rooms on their ‘Robert Smith’ tour and booked on festivals including Splendour in the Grass, Falls Festival and Lost Paradise.

God I’m Such a Mess is an album that seethes with go-for-broke honesty which provides it power and gravity. At its heart, it showcases the band’s use of theatrics, drama, and genre-bending to tell a more truthful story which was added as a ‘spotlight album’ on triple j, and named album of the week at ToneDeaf and The Music.

Tickets for the ‘God I’m Such a Mess’ tour are on sale now.

- Show will be limited to 110 to allow for social distancing.

- Hand sanitiser dispensers on entry  and throughout venue

- Regular sanitising of the venue and full clean after each day.