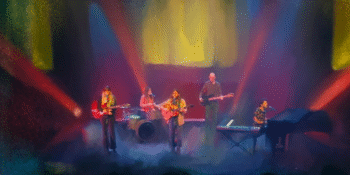 with Special Guests
Waywards (The Bank Hotel) (Newtown, NSW)
Saturday, 9 July 2022 8:00 pm
4 days away
18 Plus
Music
Australian Artists
Send this event to
HUSKY are set to embark on their first run of shows in two years, and their only shows planned for 2022.

The shows will be the belated launch of their stunning album ‘Stardust Blues’, released amidst lockdowns two years ago. The band is also celebrating ten years of fan favourite, debut album ‘Forever So’ and will be playing songs from both albums.

‘Stardust Blues’ follows a character as he traverses a city over 24 hours. His head half in his summer-night ramblings, and half in the equally present memories of a crumbling romance, he immerses himself in friends and danger and the possibility of new love.

The Age/SMH had this to say about it:

‘Stardust Blues is intimate and warm, with wonderful washes of sound, all performed with precision, emotional honesty and so many attractive hooks that it invites comparisons with the Beatles at their most inventive and gentle.’

‘Forever So’ saw HUSKY nominated for an ARIA, a J Award and the band became the first Australians signed to iconic US record label Sub Pop Records. The album featured single History’s Door, which won triple J Unearthed, and was at the forefront of the new folk revival at the time. Forever So has stood the test of time, with other favourites Tidal Wave, Dark Sea, the Woods and Hunter still featuring on radio and streaming playlists all over the world.

HUSKY have released four critically-acclaimed albums, scored worldwide play-listing and radio, plus toured locally and internationally with artists such as Neil Young and Laura Marling. The four-piece will be joined by Hollie Joyce, a singer/song writer in her own right, on vocals and guitar.