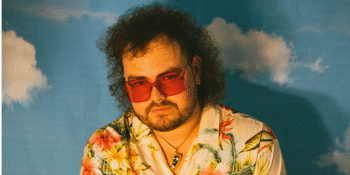 with Maxine
Waywards (The Bank Hotel) (Newtown, NSW)
Friday, 18 December 2020 9:30 PM
20 days away
18 Plus
Music
Send this event to
Saint Lane is thrilled to announce a run of headline shows this November and December in support of the EP release. The If I Leave You In The Fire Tour will kick off in Lane’s adopted hometown of the Gold Coast on 28th November, before playing Sydney’s Waywards on 18th December and Brisbane on 19th December.

After a breakthrough 12 months delivering a string of powerful singles and garnering praise from tastemakers like Billboard and The Needle Drop through to triple j, Gold Coast-via-New Zealand rapper Saint Lane is now set to release his debut EP, the raw and emotive If I Leave You In The Fire. Featuring the brand new single ‘Altar of the Heartless’ which drops today, the EP also includes previous cuts ‘When Did We Grow Up?’ with Robbie Miller, ‘Hickeys’ and ‘The Family’ plus two unreleased tracks, the epic combination of ‘The Fire’ and ‘The Water’.

Born to Fijian and French parents in Auckland, Saint Lane moved across the ditch to Australia as a teenager. Now residing on the Gold Coast, Lane has been building a loyal following both locally and across the globe with a steady stream of releases in the past 12 months. Since blasting onto the scene, Lane has showcased at BIGSOUND, taken on support duties for the likes of Lime Cordiale and J.I.D and played a 10-date tour in January of this year. ‘Hickeys’ and ‘When Did We Grow Up’ with Robbie Miller both picked up additions to triple j with a bunch of glowing reviews on Unearthed, with ‘The Family’ also picking up an add to The Edge 96.1 and Unearthed Radio. Saint Lane also garnered a nod from Briggs on his Beats 1 show The New Australian for his feature on Travy P’s ‘She Devil’, and love from press and tastemakers including The Needle Drop, NME, The Guardian, GQ and Billboard.

- Shows will be seated (1.5m apart) and limited to 50 per sitting to allow for social distancing.

- Due to venue seating layout, tickets are only able to be purchased in groups of 2 or 4 (subject to availability for both)